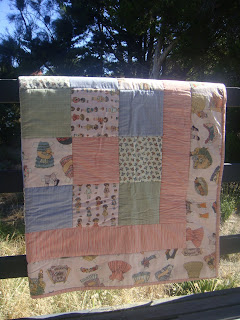 I made this little lap quilt for mum last Christmas (2008). It was the first quilt I completely made by machine and was quilted in the ditch using my old 1980's Husqvarna without a walking foot. It was a nightmare to say the least and I was never truly satisfied with the outcome. I was embarrassed to give it but the material was so gorgeous it outshone the imperfection of my lumpy bumpy quilting. And of course, a mother being a mother said she loved it. The fabric is 'Paper Dolls' by Windham and it was the perfect choice for my mum who is a keen doll collector.
I've come a long way in a year having made several quilts since then and investing in some equipment and lessons that has made quilting far less stressful than this early attempt. So I asked for it back with a promise to 'fix it'.
Over the break I've un-picked it...which I must say was easier than I thought it was going to be, particularly with some of the stitching being quite tight in some sections. It's now in pieces. 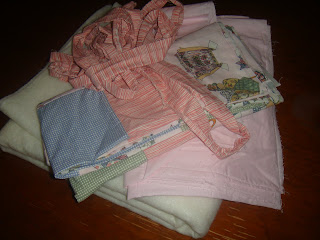 I toyed with the notion of completely pulling it apart as the big 6" squares of which there are 36, lend themselves quite nicely to a disappearing 9 patch. But in the end I thought it best to stick with the original basic plan so I've left the top as is. I'm now going to re-assemble and use the walking and darning feet to re-do the quilting. Stay tuned!
Posted by Theresa at 12:35 PM 4 comments: Links to this post

Racing to the finish... 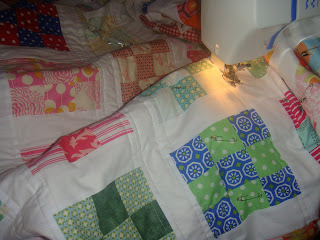 The Christmas hurly burly is almost over and we're packing to go to the shack down south for New Year's. As much as I'd love to take my sewing machine to fill in the slow summer days with some of my projects, it just won't be possible with the amount of 'stuff' we have to cram into the car. So I'm being very good and frantically trying to finish a UFO so that I have some hand stitching to do whilst I'm away. The chosen one? My one-a-day 9 patch from so long ago. I recall making my patches in record time and sitting right back on my laurels patting myself on the back with plenty of time to spare. Then I constructed the back and promptly popped it back in the cupboard. The upside of my 'slackness' is that dragging it out again today reminds me of the all the wonderful fabrics that have gone into this quilt. A legacy of just one year of quilting. It's very exciting....enough to enthuse me to create another scrap buster project with all the new left-overs in the scrap bin. Have a great New Year's everyone and hopefully finish off a few projects to start afresh in 2010!
Posted by Theresa at 5:34 PM No comments: Links to this post 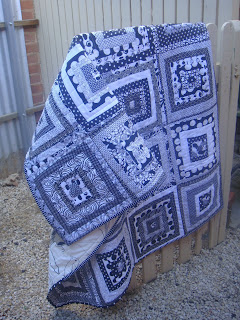 I've finally finished the Pandemonium....or it's just begun....one or the other!
Vertical straightline quilting 2" apart with Ikea bird fabric on the back and scrappy black binding.
This one is going to my little sister for Christmas. Tick. I hope she enjoys lounging under it on her couch.
Here it is with the other black and white completed earlier and is also a Christmas gift. 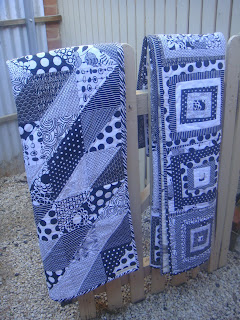 Posted by Theresa at 12:39 PM 4 comments: Links to this post 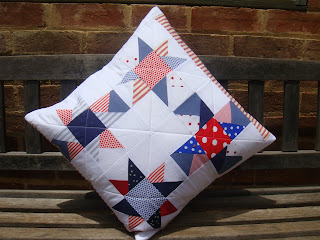 We've been quite productive this weekend managing to ice the Christmas cake, decorate the ginger bread house and bash out a cushion cover for Joe's great nephew to match the quilt made last week. There's still plenty on the Christmas work in progress sheet but we're getting there....except I keep sneaking other projects in....I'm driving myself crazy! 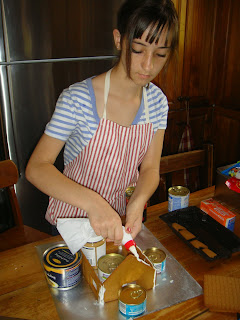 Posted by Theresa at 1:50 PM No comments: Links to this post 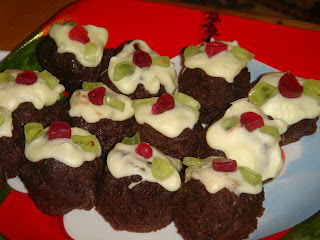 Last night was our annual Sew & Sews Christmas catch-up. This year we met at Clare's and there were lot's of laughs and plenty of show and tell. I made mini Christmas Puddings and Donna Hay's hummous with caramalized onion dip from her new Christmas magazine. YUM!
Clare's been sewing up a storm starting new quilt tops, Christmas stockings for her kids and adorable soap bags for the girls. She even used plastic coated lining! Champion effort Clare.
I made pot holders inspired by these for each of the girls. They're roughly 9" square and randomly quilted. I loved how they turned out. And the best bit....all from the scrap box! 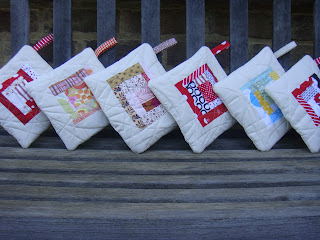 Posted by Theresa at 9:55 AM No comments: Links to this post 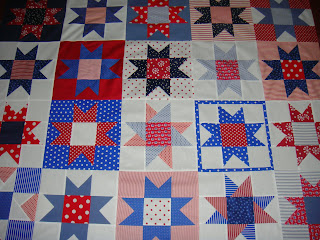 I got home from interstate only to come down with a really bad cold. So needless to say I've been feeling a little blue lately.
Then during the week, Joe's sister called to ask us to her grandson's 2nd birthday on Sunday at 9.30am. (Crikey. Do these people sleep? Sunday at 9.30am, the morning after my work Christmas Dinner....I don't think so!)
I wanted to make the birthday boy a quilt but I didn't have a lot of 'boy' fabrics in my stash. However, with the addition of a few blues to my reds, whites and limited blues, I managed to eek out enough for a little red, white and blue maverick star quilt. It measures approx 122mm x 152mm (48" x60") Here is the inspiration. 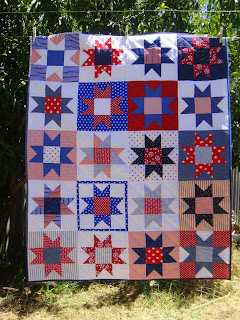 Red, white and blue is charming. It's so crisp. No wonder Ralph Lauren uses it all the time. I loved making this quilt and will definitely make another for L. I can honestly say I like every single star block - no favourites. However, looking back I would have laid the blocks out differently. That's what you get for being in a rush. I turned this one around so quickly it didn't even make it to the 'WIP List' on my blog roll!
It's quilted on the diagonal (did I mention I was rushing to finish!). The binding is scrappy and used up the last of the blues I purchased. The backing is from Ikea and is the same colour as the denim blue on the front. Ikea fabrics are great - they're wide! 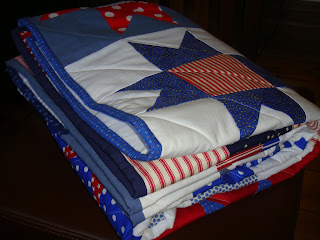 It's now wrapped and with Joe's mum to deliver to the guest of honour tomorrow morning.
Posted by Theresa at 3:18 PM 1 comment: Links to this post 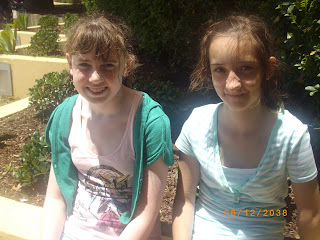 I had to go to Sydney this weekend to organise a client's Christmas Party. I always find it rather amazing that he doesn't have anyone on staff that can do that but it seems he doesn't and he gets me to do it. Up until now he was in the Gold Coast but he recently transferred to Sydney. So when R found out I was heading to Sydney for a weekend she hatched a plan to come too and catch up with her 'old' friend C who moved there with her family 7 years ago. C and R met in day care when they were just months old. They were always together from 'babies' to 'kindy' and were so alike in so many ways....right down to turning up in the same dresses but in different colours! R hadn't seen C for 3 years and was so excited when I told her I'd bought her an airfare and that C wanted her to have a sleep over whilst I was working. I was a bit nervous about them meeting again. After all, they're 12 now and a lot changes in 3 years. But I needn't have worried. After the initial "oh my goodness, look how you've grown!" from the mums, the girls embraced and disappeared into C's room. They talked and talked and talked all weekend. They're exactly the same! Same clothes, same books, same interests, same everything. It's remarkable. It's wonderful. To be able to pick up after 3 years and still have so much in common is a blessing.
I eventually came up for air and was lucky enough to spend Sunday with the family. The girls, Margaret and I went for a walk for a bit of window shopping and along their local beach front. At the end of the beach is Bathers Pavilion, the renowned Sydney restaurant. Margaret explained that you can't book. We checked it out and it was only a ten minute wait for lunch. So we grabbed it. What a treat! And as Margaret rightly said, "if we'd planned it, it wouldn't have happened and we'd have been disappointed". So with a chink of the glasses..."here's to friendships and good fortune".
Posted by Theresa at 9:37 AM 2 comments: Links to this post

You know it's nearly Christmas.... 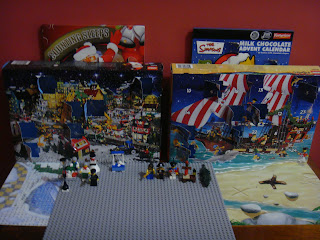 ...when the Lego Advent Calendars come out.
They've become a much anticipated ritual in our house these past few years with L even counting down the days to December 1 so he could open the box and get started. We're now in full swing at day 7 as evidenced by the Lego shrine. The routine goes: get up, find the number (although this is generally memorised the day before), open the surprise, pop it together, eat breakfast and back for the chocolate from the supermarket calendar. I know it's sort of bad eating chocolate early in the morning but it's only a little bit of chocolate! 'Tis the season! 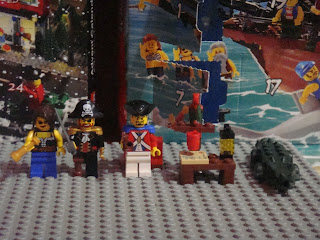 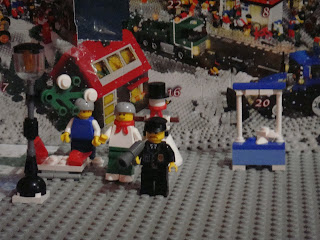 Now if you want a giggle or two, head over to Laura's blog in the next few days. She creates a very amusing saga with her Lego Advent Calendars. I guess she just has to wait a few days to open a few more characters!

Posted by Theresa at 9:03 PM No comments: Links to this post