I've been wanting a little bag to hold the essentials when ducking out or going to a concert....you know keys, purse, glasses, phone, tissues and stuff. It was only one of those 'wanty' kind of desires so I wasn't deliberately looking for one but then it occurred to me that I could make one. 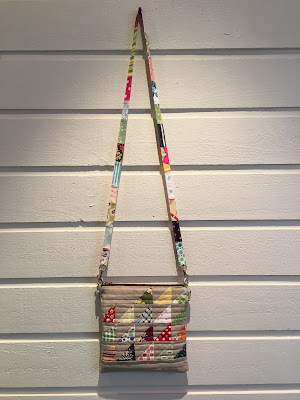 I grabbed a metal jeans zip from Spotlight, the size of the zip and my wallet determining the size of bag. Then set about setting more of my triangle binding off-cuts into 2.5" linen squares. As I was using scraps of linen I only made as many 1/2 square triangles as the squares I could cut which was 36. This gave me 18 blocks per side and I added a another linen strip to the bottom to make it a little deeper. I ended up with roughly two 9" squares. Then vertically straight line quilted each piece, set in the zip, made the bag using this method (but without the tabs) and set in two little fabric loops with D-rings to take the hardware. 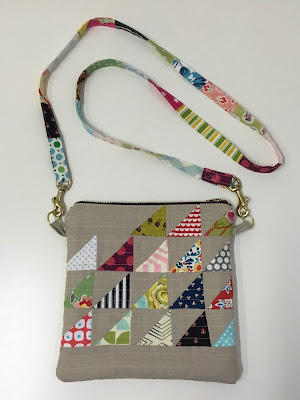 The hardware clasps are from Bunnings which are quite study and also available in brass to match the teeth of the zip and the D-rings. I made the strap in a similar way to how I make lanyards, joining 2.5" wide scraps, folding in towards each other and top stitching.

The lining is about the last piece I have of some fox fabric I purchased last year from Spotlight. 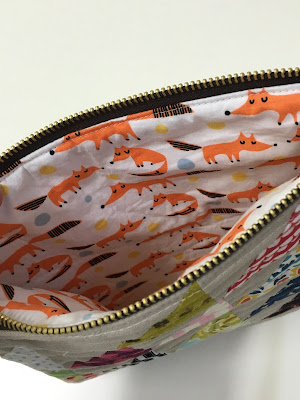 Of course as soon as I shared the results someone asked for one too....perhaps I should learn to make two of everything!
Posted by Theresa at 9:46 AM No comments: Links to this post

After creating my flying geese knitting bag made from the triangles leftover from joining binding strips, Miss R asked if I'd make her something similar as a backpack for her laptop. 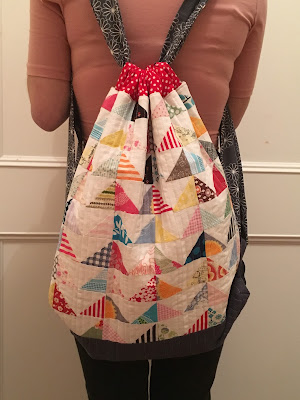 I made a 15" square of blocks, gave it a linen base and set in some tabs to thread the straps through. The top drawstring fabric is wider to also take the thicker straps. 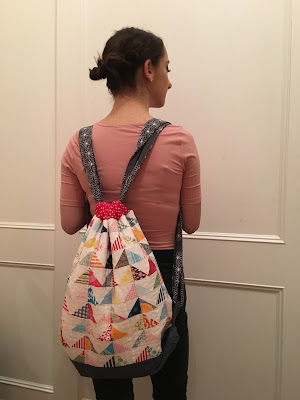 Whilst it looks a bit like a beach bag because it's holding text books and not the intended laptop, she's delighted nonetheless. 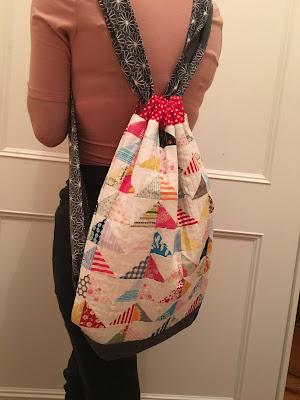 A bit of fun sewing and playing with scraps some of which I'm completely responsible for creating and others gifted from kind sewing friends.

Posted by Theresa at 9:23 AM No comments: Links to this post

Whilst working on something else recently I had an urge to make a little patchwork bag out of 2.5" squares. It turned out really sweetly, so I decided to make another....only bigger. That one turned out even better and because I had some up-cycled leather cord I finished that one off first. 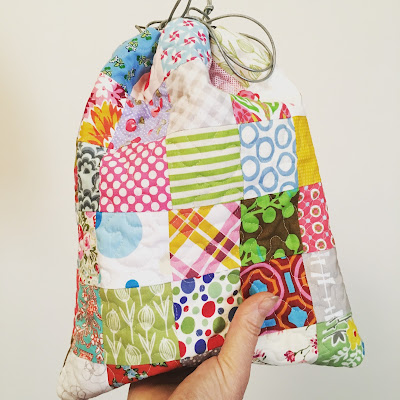 Then I whizzed into the city and grabbed some cording to finish off the first one. 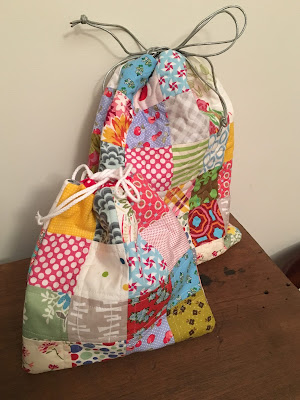 Then a few weeks ago, Clare gifted me some little triangle off-cuts that she'd saved for me. They were really pretty low volume pastel colours left over from a baby quilt. I couldn't get flying geese out of my head so I decided to use the triangles as scrappy flying geese. I placed a triangle onto opposite corners of a 2.5" white square lining up the edges of the triangle with the corners and stitched an extremely scant seam. Then trimmed down the middle to yield two 2" 1/2 square triangles. It wasted a little bit of fabric and some were a bit wonky. However in the main I didn't bother trimming them square and just went for it, piecing them together into two 12.5" square blocks of 4 pairs across by 7 down. 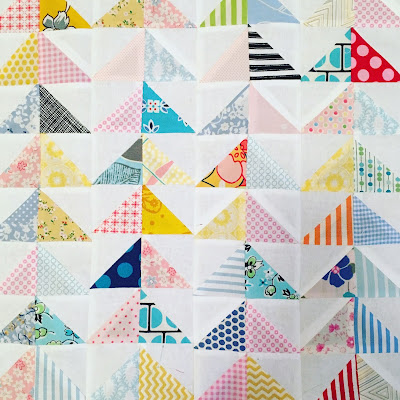 Then during the night I decided I needed a new knitting bag for a girl's knitting weekend. I got up super early the next morning (after dreaming about how I was going to do it all night!) and quickly made another drawstring bag out of the scrappy flying geese blocks. I placed a piece of left over batting in between a calico backing and straight line quilted vertical lines then finished it off with lining and striped casing. 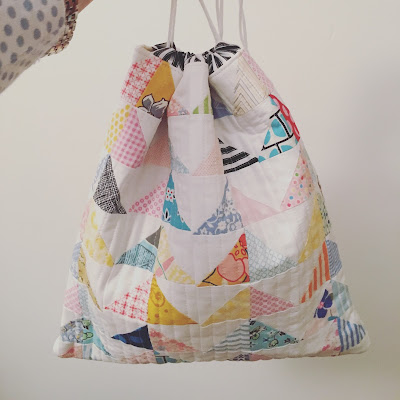 I love how it turned out and so does my daughter who has asked for one of her very own but bigger for her laptop. Lucky I save all my own binding corners and have other sewing friends who give me theirs. The zip-lock bags are about to be upturned again!

The original pattern I used for the drawstring bags is a tutorial by Ayumi on her Pink Penguin blog. It gives instructions for the small sized bag I made and I've just re-sized it from there.
Posted by Theresa at 4:17 PM 1 comment: Links to this post

I am very lucky to have a group of extremely creative and crafty girlfriends with whom I catch up with most Thursday evenings. We began as a quilting group and then as invitations extended to a few who are more inclined to knit, crochet and spin I began to understand the world of wool that currently exists. Up until a few years ago I only knew about wool purchased from a department store, that which is found in balls, matching dye-lots in a range of ply and is either pure or poly. And in so far as needles....well they certainly didn't screw off to become interchangeable and had nothing to do with 'magic'.

So after lugging my machine over most weeks for a bit of sewing I decided it was probably easier to yield to the masses and reignite my knitting skills. 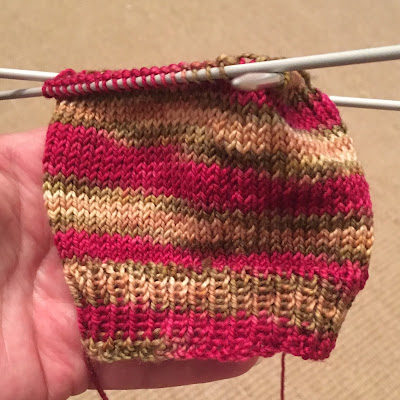 A year ago I was lucky enough to accompany a few of the girls to the Bendigo Sheep and Wool Show  and with my spending money in hand purchased my first skein of indie dyed sock wool, Rose Gardens by Kathy's Fibres. 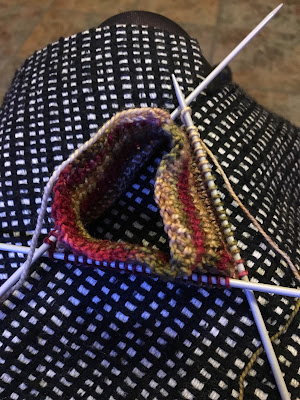 And now, after weeks of sitting at drum lessons (which causes me to miss some Thursdays) and just shy of this year's Bendigo show I'm celebrating a pair of finished socks, an item of clothing that two years ago I wouldn't have dreamed I could have attempted. And, I'm so glad I now have a beautiful warm pair of hand knitted socks to wear in the middle of this bitter winter we're currently experiencing! 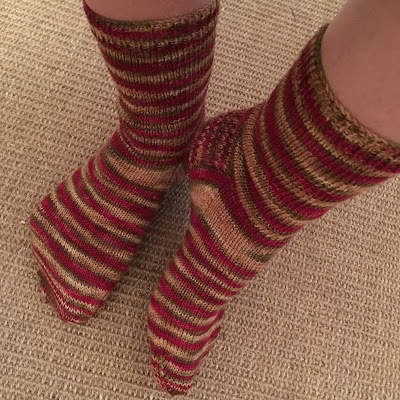 So thank you crafty friends for inspiring, coaching and above all, sharing. 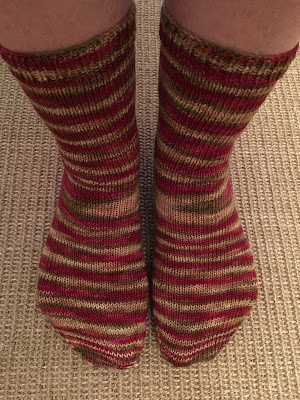 Well ...um....I haven't been blogging. It seems life, the universe and everything has been conspiring to use up every second I have to put a stop to anything more than an instagram post every now and then. I'm not saying that's going to change very much any time soon but I've noticed a few blogs I read have also surfaced to say they're back...but no promises. So I thought, well perhaps I should make an effort at least. So here I am.

Quilty efforts of late have been sporadic and I've found myself assembling tops and not getting much further. However I have had two babies arrive (both on the same day actually!) and that gave me the opportunity to enjoy the scaled down, fast finishing that comes with cot sized quilts.

Foolishly I didn't get a photo of the first finish which was a scrappy 16 patch using 2.5" squares beyond the instagram layout on the floor. I'm hoping that as this one was gifted to Joe's nephew's brand new daughter we'll get to see it again. This quilt was pot luck and I was very much relieved that the baby was a little girl as many of the colours from my scrap bucket tend to be pinks and reds. 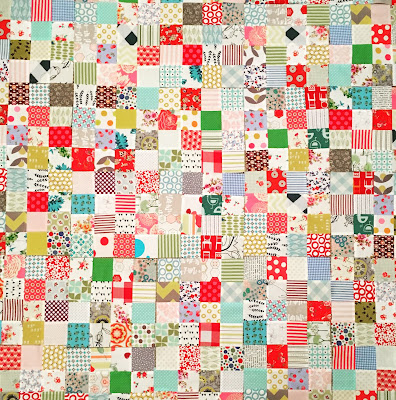 The other was for a dear friend's first grandchild which I patiently waited until I learned that he was indeed a little boy. This gave me the opportunity to play with blue fabric and everything either side which I pulled out of the cupboard and put back in (and took out again and put back in!) trying to decide what I could possibly make. I ended up settling on solids and isosceles triangles using up some fabrics that I had just enough to cut out a 6" strip. 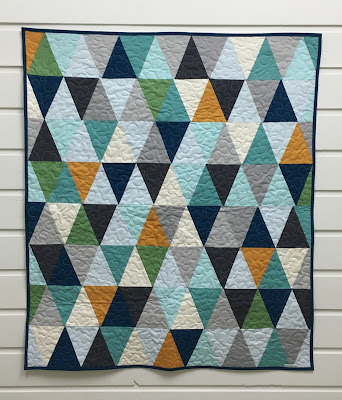 For the back I used the absolute last of the strips and the corners of the triangles. I can honestly say I used absolutely all of the turquoise, grey, ochre and green and ended up with a back that looks like a front. Not my usual style but so pleased with how it turned out. 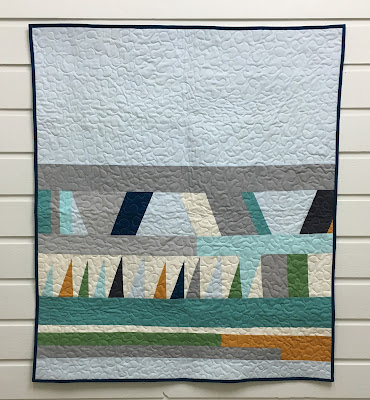 And then I bound it all with the indigo which turned out rather smart. 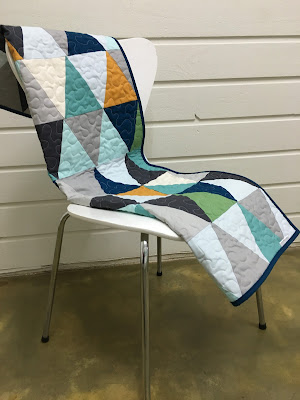 And whilst we're talking about blue, a message popped up on my email a few weeks ago which was totally out of the blue. I received an email from Artsy asking me to link back to a blog post I had made way back in 2013. I had mentioned in that post how I thought a piece of fabric (which was in fact an up-cycled shirt of Joe's that I couldn't bear to part with) looked like the work of Yayoi Kusama. Artsy strive to make all the world's art accessible to anyone online and as part of their site feature the work of Yayoi Kusama and asked if I would be kind enough to make a link from my site to theirs. How they found me from my one little mention I'll never understand but seeing as they had gone to so much effort and were so nice about it (I did email back to make sure it was a real request!) I thought, why not. So if you have a moment check out their site and of course Yayoi Kusama.
Posted by Theresa at 4:04 PM 4 comments: Links to this post