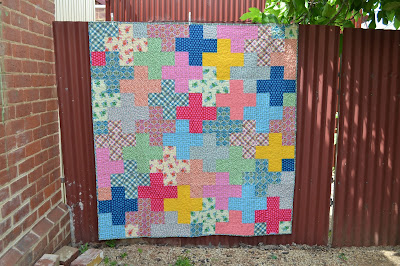 This is the year of the '18th' in our household with R seemingly at an 18th party just about every second week. R requested a Plus Quilt for a special friend's birthday which is coming up mid month. 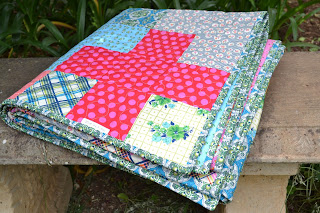 Even though she actually asked way back in July....I still managed to only find time for it these past two weeks. Whilst it was a bit of a rush to the finish line which reduced due to booking in a machine service, I still managed it in good time and to actually take some photos before it leaves. (I made another quilt earlier this year and it left before I could get any photos and I'm still kicking myself.) 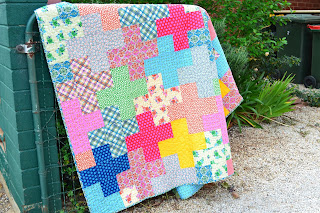 R and I discussed favourite colours and I could see her staring at my lovely stash of DS Quilts Picadilly which was released through Spotlight. It has the perfect amount of vibrant green, blue and pink which were all requested and even though based on traditional fabric designs has a modern edge perfect for an 18 year old. 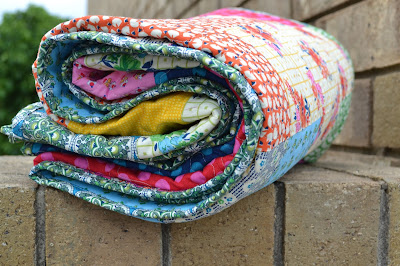 I reluctantly agreed, dreading the prospect of cutting into much loved and hoarded fabric. But to my absolute delight it was being discontinued and discounted at Spotlight and I subsequently ran around to the four that span my area and picked up all bar one of the designs.

And because the prices were so cheap I managed to get two lots of yardage for a back...I had options even! I opted for the tiny blue flower and bound it the blue mosaic (my name for it!). 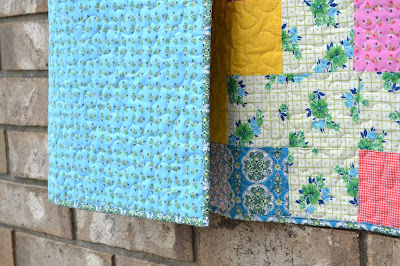 The plus quilt pattern is by Jeni Baker and is perfect for featuring a whole fabric line. I was a little short on the specified quantity in the range so I added in a bright yellow and orange micro gingham. 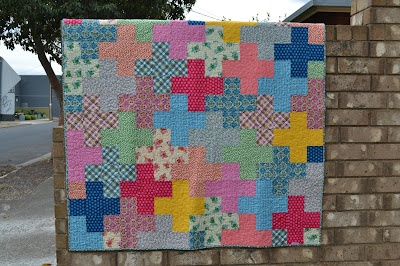 Now that the photos are taken, the quilt is ready for wrapping, and the blog written, I'm linking up with Crazy Mom's Finish it up Friday.
Posted by Theresa at 2:56 PM 7 comments: Links to this post

Blogging is rare these days but this quilt finish is so lovely I just had to share....or at least record it so I can review in years to come! 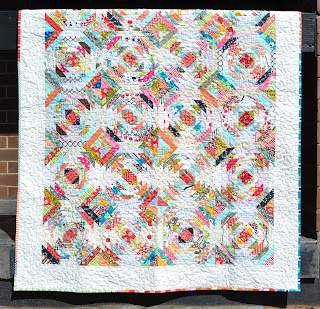 This is my scrappy pineapple quilt that I started to make blocks for last January.
After falling madly in love with Crazy Mom's Plenty of Pineapples version that capped off her 2014 year and her 101 scrap finishes, I had to have one. 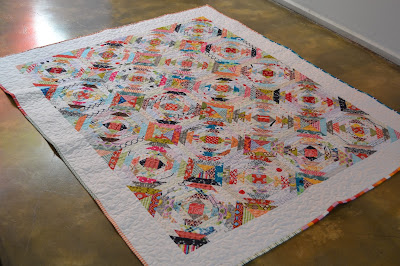 It was the perfect sewing project to take away to our shack last summer where I have limited sewing facilities. I set myself up for sewing all of my 20 blocks at once, each growing at the same level of intensity, row by row. It allowed me to balance my colours matching each strip opposite each other. I guess this ensured a little bit of colour continuity for me. I managed to get to 11" sized blocks before having to come home. And once we did, we all went back to work and school and those blocks have sat in their unfinished state for the last 8 months or so. 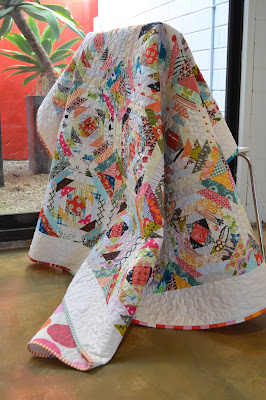 I rifled past them in the storage box every now and then and funnily enough started to like the blocks less. I was using scraps, many of which had been turned over in the scrap pile for some time so I was probably a little sick of them. Other fabrics had been gifted, thrown into the blocks because they weren't really my usual choices. So the whole idea of a pineapple quilt of my own loomed less and less on the near horizon.

That is until L invited us to her 'Girls Night In' fundraiser for cancer research which also came with a request for raffle items. Naturally, I thought I could easily make a quilt and set about sorting through the cupboard. My first instinct was to make a kitchen sink quilt out my orphan blocks. (Which I did make but fell soooo in love with it couldn't bear to part with it...but that's another story.) Another sort through bits and pieces and I chanced upon the now very buried pineapple blocks. Bingo, these only needed corners and they'd be finished! That done, multiplied by 20 blocks and a 5" border delivered a lovely little lap size quilt of 52" x 64". 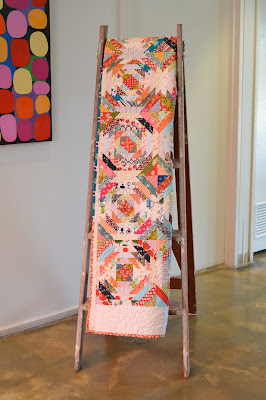 And guess what? I love it again. Isn't it funny how that happens? But I had the good sense after my first about-face to tell L that it was for her straight away, that way I couldn't change my mind again! 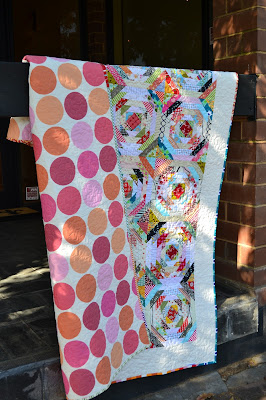 The binding is scrappy, cobbled together from left over ends of quilt bindings. The backing fabric was gifted by M. Add that to the gifted scraps that appear in the blocks I feel so many of my sewing friends have made this quilt come to life for L's fundraiser. I'm almost wishing I might be able to win it back!

And to celebrate this finish, I'm linking up to this quilt's inspiration, none other than Crazy Mom's Finish it up Friday!
Posted by Theresa at 2:26 PM 9 comments: Links to this post

Our family were firmly in the 'we're not cat people' camp. That is until we found a kitten abandoned in our outside laundry back in December. I'm not sure who adopted who, but in that short amount of time George* has become the fifth member of the household. So much so, after a little health problem recently I decided he needed a little quilt of his own to snuggle. (I've clearly run out of babies to make quilts for at the moment!)

I had a block in my head based on a quilt I had seen in the b&b we had stayed at in Culemborg in Holland a couple of years ago. I searched all of my block books and found that it could be made several ways, depending on how you placed your fabrics. Additionally, the block came with a plethora of different names! The one I opted for was Father's Choice and set about making George's quilt in a scrappy fashion. 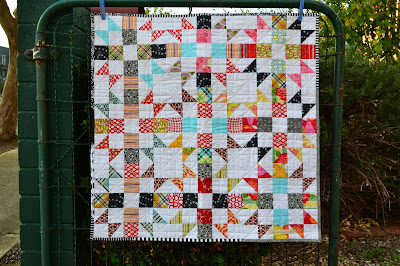 I've used 9 blocks and I really love how the joining of the blocks makes for another star appear in the centre.The binding is also a combination of scrappy blacks...all bits of binding that I end up having left over from other bindings. My only problem with using these binding bits is that I bind by hand at 2.5" width and by machine at 2.25". Luckily I was machine binding this one as I figured that it would be in the wash more often than usual, so was able to trim down the wider bits.

There's been a bit more quilt action happening in between life as we currently know it...my studies, R's year 12 studies, L joining the rowing team....all of which cuts into my sewing time!

This past Easter, Clare invited the girls around for a sewing day and to catch the last rays of warm autumn sunshine before the chill set in. I used the time to cut up a bunch of solids from the stash and ended my day with a pile of lovely triangles. 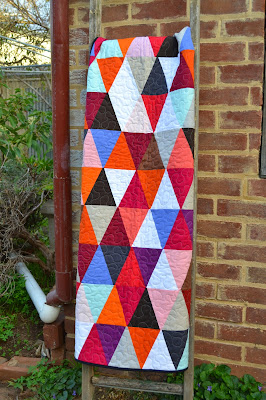 The autumn weather was obviously influencing the selection as I had initially intended something with a bit more of a pastel outlook. 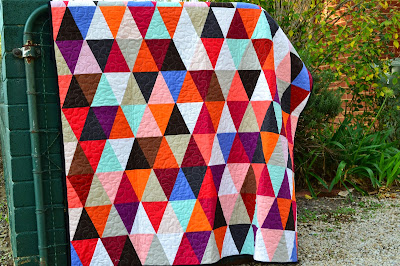 But I love this colour scheme nonetheless and whilst the photos seem a little dull due to late afternoon photography, it's really quite vibrant. 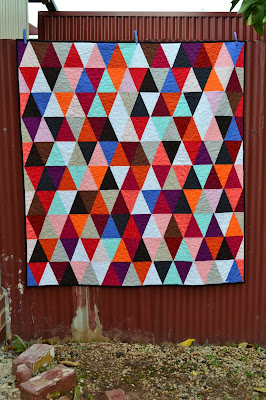 The back is the last of some Ikea fabric I purchased way back when Ikea first opened here in Adelaide. I think it was part of the Cecilia range that also included the 'birds'. 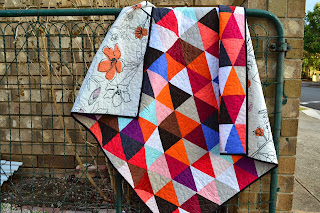 The orange and pink co-ordinate beautifully with the front. This one will go to school as a fundraiser. 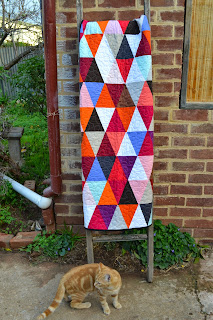 * George is George because he has quite a definite cross across his back, a little like the St George Cross in the Union Jack.
Posted by Theresa at 9:38 AM 1 comment: Links to this post